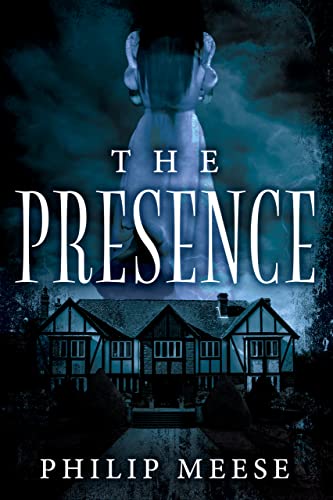 The Presence by Philip Meese

THIS IS HER HOUSE, AND SHE DOESN’T TAKE KINDLY TO GUESTS!
Being a disbeliever in the paranormal, Kate Thorpe has no qualms about accepting the job of live-in manager at Blackmoor Hall; the supposedly-haunted 14th-century mansion in the heart of Lancashire. After moving her family into the house, Kate starts to think of ways she can use the legend of the ghost of Jane Weston, who was burned as a witch in Elizabethan times, to turn Blackmoor Hall into a profitable business.

Shortly after moving in, each member of the family have experiences they cannot explain; doors slamming, electrical appliances tampered with, and Kate’s baby daughter pointing and laughing at seemingly empty spaces. The constant feeling that someone is watching them, particularly in Blackmoor Hall’s seemingly endless corridors, is undeniable; but that’s just the start, and their experiences soon become more terrifying. When a celebrity medium makes contact with the ghost during the filming of a televised show, she reveals that Jane Weston has not only attempted to murder one of her children, but intends to try again, and kill Kate as well.

As events unfold, it becomes clear that an evil ghost is not the only set of eyes watching their every movement within the house – and leads those that are still alive to question whose intentions are more sinister.

The Presence is a British ghost story, set in Lancashire, England, but it is far from your typical haunted-house novel. In addition to an evil spirit with a vendetta against the young family (and seemingly unlimited supernatural powers), another presence inside the house is watching their every move.